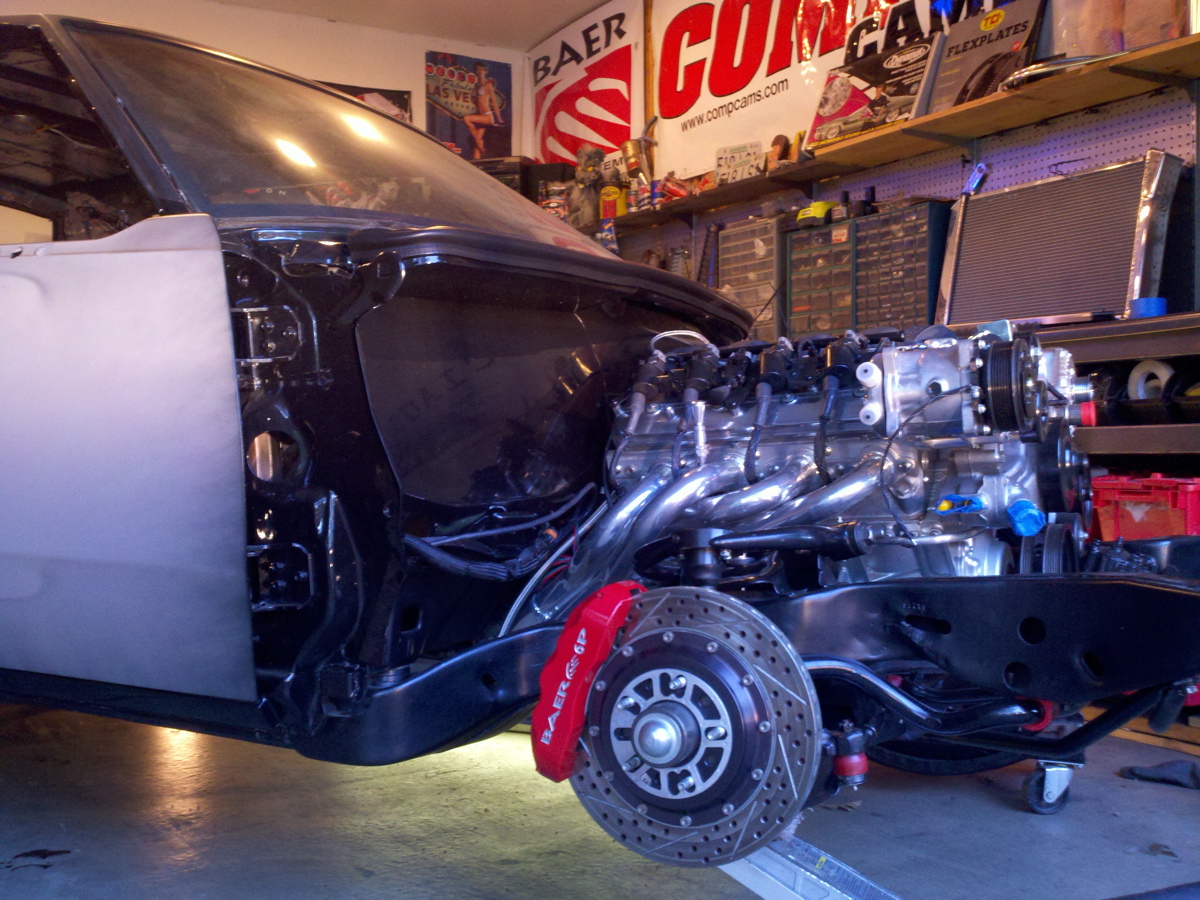 If you have been following along, then you already know the Regal has a big brake system with very nicely sized rotors for B-body spindles, front dual piston calipers & rear pbr style calipers. This was an excellent performance choice and certainly glad they were added to the build, but another opportunity for bigger brakes presented itself. At this time, a  suspension change was also necessary, which should improve handling as well as improve looks.  In retrospect, this may have been a side project that was unnecessary, expensive and may have slightly delayed the overall progress of the car; but this addition looks SUPER cool and should allow the car to perform better! (stop on a dime time)

The new brakes are the Bear 6P system with G-body spindles in the front. The rotors are 13 inch / 2 piece rotors in the front and 12 inch / 2 piece rotors at the rear. I will need to either use the stock G-body upper/lower A-arms or switch to one of the many quality aftermarket sets available (A-arm decision to be continued!). I will most likely use aftermarket A-arms, but at this time some trial and error was performed for mock up and ride height checks.

The caliper brackets for the Moser 9 inch axle, that also hold the “drum in hat” style parking brake assembly, needed some coaxing to fit on the Moser 9 inch axle housing. Super Chevy Magazine has an article on making the brackets fit to their Moser 9 inch (they turned down the cap bolts), but I took a slightly different approach. These details will be shown later in the post.

The Moser 9 inch housing I have has an older style brake/bearing flange that was not a direct fit with the rear caliper bracket. Super Chevy Magazine had a similar issue in an article they wrote for their “F-73” Camaro project. The issue with the older style flange: the bolt holes need up-sized,and the hex head cap bolts interfere with the axle tube when installed through the up-sized holes.

Baer Brakes covers the first issue in their installation instructions; simply up-size the holes and discard the old “t” bolts that secure the caliper bracket to the axle flange. The second issue was addressed in the magazine article by turning down the outside diameter of the hex head cap bolt before installation. I did not like this option. I believe the strength from a cap bolt comes from the “cap” and this would make the hex head more vulnerable to stripping out with a thinner side wall when torquing them down at installation and/or removal. My solution was to grind a small relief in the axle tube for the hex head cap bolt. Once this was done, it was a normal installation The caliper bracket, E-brake drum assembly, and the axle all are installed at the same time, so it is a bit of a trick to align them. Finally, the 2 piece rotor and 6P calipers are installed for a massive rear brake conversion. Again this was not something I was ever planning on adding to the Hot Rod Regal, but Craigslist will turn up some pretty cool things for a pretty cool price sometimes!

Just to give everyone an idea of what this bigger caliper upgrade looks like, I have included the following before and after pics of the rear brakes. Visually, the Bear 6P pro plus system has a better presence.

Finally, there was a rear suspension upgrade at this time as well. I traded for a set of new Hotchkis 2 inch lowering springs (P/N 19114R) for the rear axle, and they lower the car to a very nice stance. When more weight is added to the car, I am sure they will look even better! This final photo shows the car with a 20 inch rim in the back and a 17 inch rim in the front. I will eventually have a 18 inch rim in the front and 19 inch rim in the back combination, but this is a good start to imagining the final stance.
Hope you enjoyed the latest progress to HotRodRegal.com